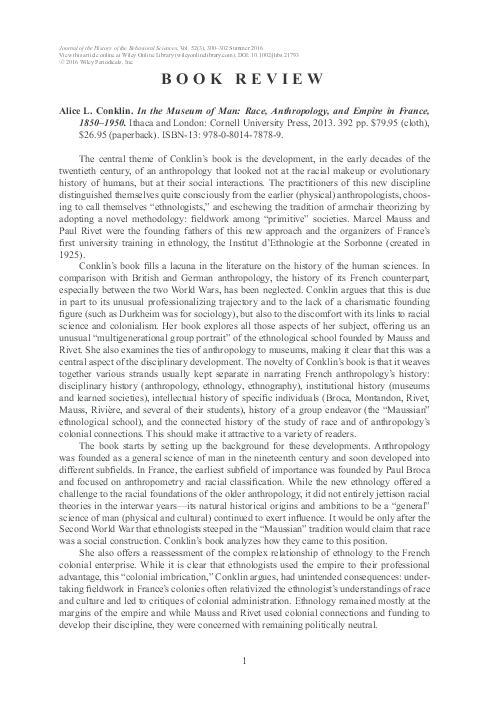 
By Alice L. Given the size and importance of the French empire in the nineteenth and twentieth centuries, one would have expected that France would be a leading center for anthropology and that the history of French anthropology during this period would be well documented.


As Conklin points out, this is by no means the case. Indeed, the very term for the discipline, "anthropology," was continually contested throughout this long period, as was its primary alternative, "ethnology. She focuses in particular on changing and contested ideas of "race. Conklin provides a fascinating glimpse into the way in which social thought was shaped in response to historical circumstances.

The political stakes in the debate over race were high, especially during World War II, when some scholars who favored the biological interpretation of race ended up collaborating with the Nazis. Others who favored a cultural and historical interpretation either supported the resistance or were murdered by the Nazis because of their Jewish background. Based on a huge amount of primary and secondary research, Conklin's pathbreaking book will be of value to students and scholars of French, European, and even American intellectual, cultural, and political history.

Conklin's book is simultaneously a history of the key institutions in which the study of mankind took place, of the discipline of anthropology, of the thinking of social scientists, and of a concept that has played an important and often nefarious role in European history. She demonstrates that rather than there being a 'colonial' or a 'French' conception of race, there was no consensus but heated and unresolved arguments about what, if anything, race meant. Conklin takes in institutional, museological, and intellectual evidence, leading to a fascinating reconstruction and critique of the exhibits of the Musee de l'Homme in the s and an insightful discussion of the Vichy interlude and its aftermath.

Reddy, William T. Laprade Professor of History and Professor of Cultural Anthropology, Duke University The human sciences are undergoing profound revision at this moment, and the transformation is nowhere more evident than in the case of anthropology and its historiography. The history of anthropology in France has a special role to play in this new discussion because of the strong universalistic tendency in French intellectual life. In this book Alice Conklin traces in fine-grained detail the conflicts, tensions, paradoxes, and debates on the century-long path from a science that accepted racial differences as a fact of nature in the age of European imperialism to the repudiation of 'race' and the study of a unified humanity in the aftermath of World War II.

Deeply researched and authoritatively written, Conklin's book will influence debates about race, human rights, and their intellectual history in the twentieth century. Conklin's tightly-woven narrative Using an impressive array of archival texts a term she extends to physical objects and photographs Conklin is masterful in her exploration of how race, racism and ethnology were redefined by the men and women who created the Museum of Man Le Musee de l'Homme between the two world wars.

Conklin's book is a powerfully told story of this evolution and its hiccups, and therefore of the scientific roots of race, racism, colonialism, anticolonialism and antiracism in the twentieth century, and is well worth reading. The resulting narrative is complex, nuanced, deeply researched, and ultimately fascinating.

Organized more or less chronologically, the seven chapters of this book interweave intellectual, cultural, and political history as Conklin examines the works of the main French anthropologists, the institutions that housed them laboratories, museums, and schools and the contexts political and academic that framed their projects. Her footnotes and bibliography document her deep archival research and vast secondary reading. She touches upon developments in many of the human sciences: philology and linguistics, ancient religions, art, history, archaeology, and museography.

She also discusses how the transformations of German, British, and U. Conklin writes for scholars who can and must make As Conklin makes clear in this thorough and highly valuable study, the vestiges of belief in racial hierarchy did not disappear, but the intellectual circles of Rivet and Mauss helped bring it into disrepute.


The French Right Between the Wars. Samuel Kalman. Popular Culture in Modern France. Brian Rigby. Short Black 3 The War of the Worlds. Noel Pearson. France Between the Wars. Sian Reynolds. Peoples and Empires. Anthony Pagden. Pluralism and the Idea of the Republic in France. Julian Wright. Homo Juridicus. World Without End. Hugh Thomas. Citizenship between Empire and Nation. Frederick Cooper. Bringing the Empire Back Home. 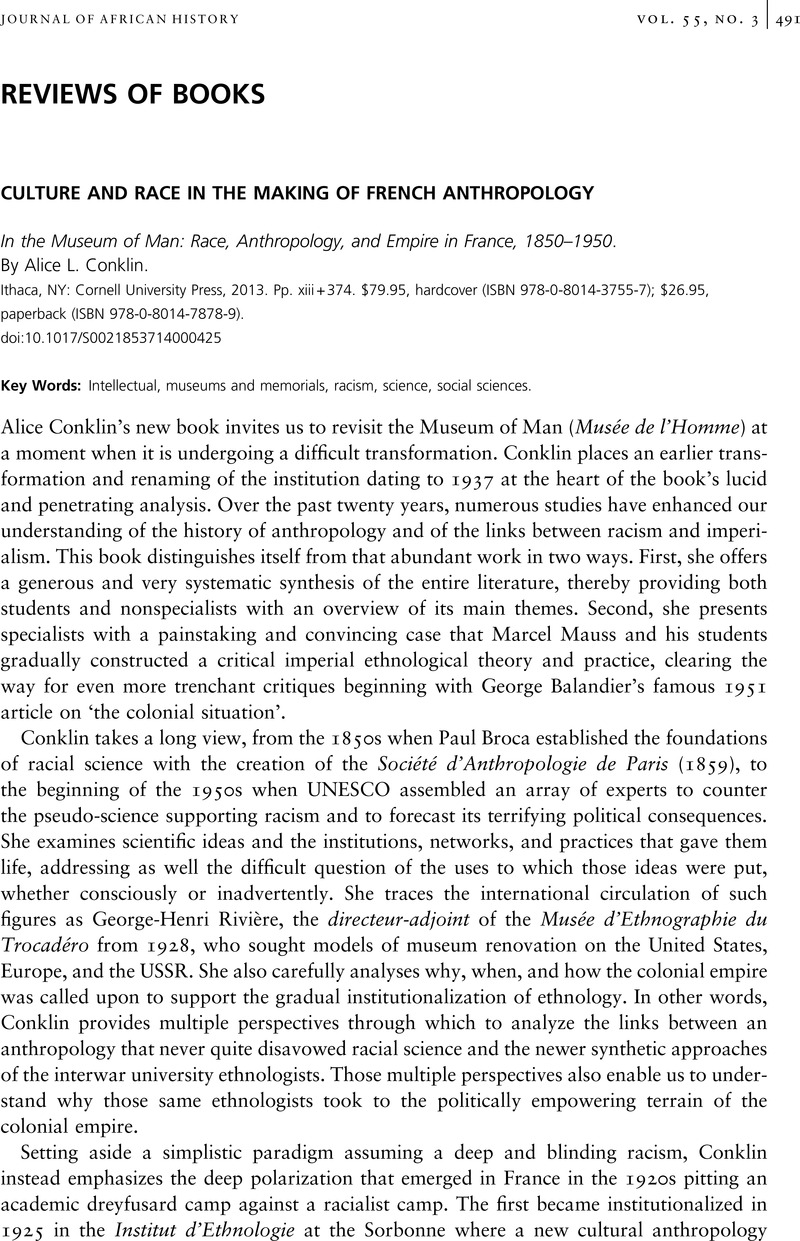 Western Sahara. Radio and the Politics of Sound in Interwar France, — Rebecca P. The Ideological Origins of Nazi Imperialism. Woodruff D. Law and the Politics of Memory. Stiina Loytomaki. India and the British Empire. Douglas M. The Extreme Right in Interwar France. Why France? Laura Lee Downs. The End of Progress. Amy Allen. Imperialism Past and Present. Emanuele Saccarelli.

The Crime of Destruction and the Law of Genocide. Caroline Fournet. A Nation Beyond Borders. Michel Bock. War and Trade in the West Indies. Richard Pares. Museums in Postcolonial Europe.

In the Museum of Man: Race, Anthropology, and Empire in France, by Alice L. Conklin

Museum of mankind in Paris reopens